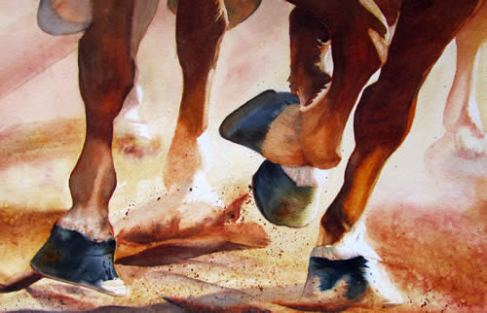 Or going round the bend?… It is all in the perspective.
This blog has been uncharacteristically quiet for some time, as I have been wrestling with words in the more formal ways of essays and dissertations. It may go very quiet again as I start my last term at theological college. The next few weeks are going to be breathless, to say the least. Essay and dissertation deadlines to meet. A house move with all its attendant tasks of clearing, sorting and organising. The house clearance of a parent. The emotional journeys that go along with both of those. An ordination to prepare for, logistically and spiritually. A whole new way of being/ living with a strange new wardrobe to boot. Enormous adjustments on every front.

Living in a community of other ordinands, half of whom are going through similar processes and pressures, this collision of demands feels almost normal. Those who went before us, followed similar paths, and those coming up behind, will find they hardly turn around and it will be upon them, too.  I did say ‘almost’, however. Like the child in the crowd of the story of the emperor’s new clothes, I feel I have to point out the obvious – that this is very far from ‘normal’. Crazy would be another way of putting it. It happens the way it does for a whole raft of historical reasons, and my plaintive cry that this is an extraordinary ask, isn’t likely to change anything.

When my husband qualified as a doctor, his first year of ‘house jobs’ involved working 120 hour weeks, with sleep happening in interrupted episodes. Not great for doctors, their wives or their patients!  Senior medics took the view that they had done it, and therefore the next generation must follow suit. What didn’t kill you, made you stronger. It was not entirely without merit. Young doctors learned fast, by encountering most emergencies, sometimes all in the same night. They had continuity with their patients, (seeing more of them, than anyone else) and were able to observe the patterns that were developing. They had masses of hands on, decision making experience none of which is wasted, even if  some of those decisions were made bleary eyed, at three o’clock in the morning. That has all changed now, and many would argue that the pendulum has swung way too far in the opposite direction, with the loss of all of the above, but that is another story.

Life as a deacon/priest won’t be easy. There will be plenty of tough stuff ahead. As much as I am looking forward to what I anticipate being a very fulfilling and rewarding next chapter, I am realistic about its challenges. So perhaps the last hurdles/fences being some of the highest is appropriate after all, as all part of the preparation and formation process. Perhaps. In the meantime I am hugely grateful for the prayers of friends and family as the next few months unfold. “More things are wrought by prayer than this world dreams of” comes from the poem Morte D’Arthur, by Alfred Lord Tennyson,  and is worth quoting in its fuller context:

Pray for my soul.  More things are wrought by prayer
Than this world dreams of.  Wherefore, let thy voice
Rise like a fountain for me night and day.
For what are people better than sheep or goats
That nourish a blind life within the brain,
If, knowing God, they lift not hands of prayer
Both for themselves and those who call them friends?
For so the whole round earth is every way
Bound by gold chains about the feet of God.

Prayer is a precious gift we can give another. I have been on both the giving and receiving ends of prayer, all of my life, and hold it in very high regard. I don’t pretend to understand the way God uses it, but that He does, I have no doubt. So if you pray, then hold me, and those training with me, in your hands and hearts, as I do you, and thank you.

4 thoughts on “Rounding the last bend”